This Article provides a detailed technical understanding of the kWh vs kVAh regime and charts out the need for reactive power in the electricity distribution system and importance of reduction of reactive power.
Power Factor: Power factor (pf) is defined as the ratio of active power to the apparent power of the system  i.e. pf = kWh/kVAh
As shown in Fig, the quantities P, Q and S are represented by a power triangle. 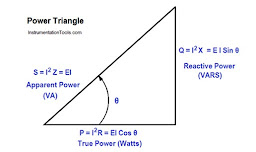 Ideally the power factor is required to be unity. However, the power factor is leading if the load is predominantly capacitive and lagging if the load is predominantly inductive. PF incentives are given on electricity bill if the Power Factor is between 0.95 to 1. On other hand, penalties are levied if the Power Factor is below 0.9. It is therefore required that consumer should maintain higher power factor above 0.95 through proper compensation.

Power factor ratio is also equal to the cosine of the phase angle between true power and apparent  power. It should be noted that power factor, like all ratio measurements, is a unitless quantity.
As can be seen from the figure above, “power factor” can also be defined as the cosine of the electrical angle between the voltage and current vectors in an AC electrical circuit. However, power factor is not dependent upon the magnitude of the voltage and current but the phase angle between the voltage and current vectors.
The active power (kWh) is actually consumed by the electrical equipment and converted into work for creating heat, light, motion etc. However the reactive power (kVArh) is just used to provide the electromagnetic field in the inductive equipment, stored up in the windings of the equipment. Therefore while the kWh power is actually put to work, the kVArh power is just required to convert the electrical power into work.

Generally, the two-part tariff is followed by distribution utilities for the billing of electrical energy. The two parts are – fixed charges based on installed capacity and variable charge which is based on energy utilized actually.

Further, the two additional components namely Electrically Duty which is usually some % of billed energy and Fuel Cost Adjustment (FCA) charges are included in the bill. Thus, the total billed amount is calculated as follows- 16% – Example value

What is kWh billing system:-

At present, in Maharashtra and  some states, the consumers are billed on Active Energy Consumption measured in kWh along with other components such as ED and FCA described above.

In kWh billing system, the incentives/ penalties are levied on Power Factor.

What is  kVAh Billing System:-

Both Active (kWh) and Reactive (kVArh) energies are consumed simultaneously. Reactive Energy (kVArh) occupies the capacity of electricity network and reduces the useful capacity of system for generation and distribution & hence its consumption also needs to be billed. kWh based billing is associated with PF incentive /penalty mechanism. Considering that the kVAh based billing has an inbuilt incentive /penalty mechanism and separate mechanism for the same is no more required; instead of billing two energies separately, billing of kVAh energy is preferred as a commercial inducement.

The consumer is encouraged to draw/inject minimum reactive power.

In the state of Maharashtra, as per MERC Order in Case no. 195 of 2017 dated September 12, 2018, The Commission intends to implement kVAh billing to all HT consumer and LT consumers having load above 20 kW from 1st April 2020.

Thus, considering the larger benefit of consumers as well as the utility, it is important that the existing billing regime can be migrated to kVAh based billing. 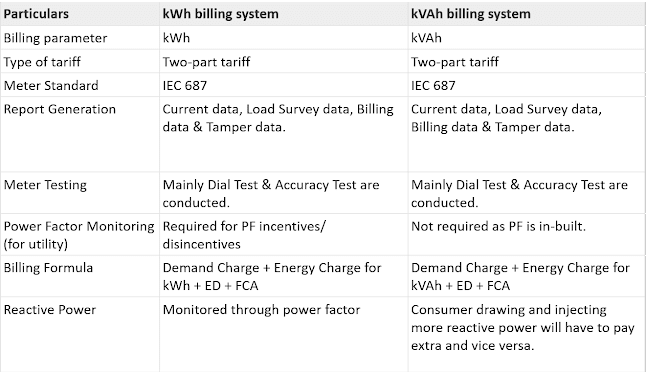