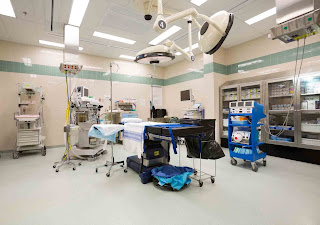 The healthcare environment comprises of various combination of sensitive electronic loads and other commercial loads. Hence maintaining quality power is essential and critical.As the medical devices are sensitive, poor quality power affects their performance. Electrical disturbances will lead to lock up of the devices. Power quality problems may arise due to non-linear loads, injection of harmonics, and interaction between medical equipment. Common sources of power quality problems found in hospitals . Since power quality problems are cumulative; power quality events (detectable in an audit) can lead to loss-of-life and eventually premature equipment failure. An attempt was made to identify the power quality levels to assess the quality of service received from the utility and locates the areas within the hospital where problems arising from instability exists or may develop in the near future.


The hospital under study has the following types of power supply.
Normal Supply (NS) is a direct utility supply (HESCOM) for non-essential areas.
Essential Supply (ES) is used for areas of medical importance that are not critical to patients in the case of supply interruption.


The essential supply is backed up by an emergency generator.
Uninterruptible Power Supply (UPS)/stabilizers is used for operating theaters, patient monitoring and other equipment that is important to the well being and safety of patients. The hospital complex under study has incoming supply of 11kV from the utility. Transformer with Δ-Υ connection and solidly grounded is used to buck the voltage to 440 volts. The critical medical loads are: X-ray, CT, MRI, ICUs, operation theaters which contains surgical suits etc.

The methodology employed was taking the measurements of voltage, current, % voltage THD, % current THD at few medical load points and other miscellaneous loads using an Energy audit kit (Fluke) at Reputed College of Medical Sciences & Hospital, Chennai, The data obtained were compared against the IEEE 519 standards for analysis.


X-ray Here X-ray equipment is fed from essential three phase supply. But no stabilizer is employed. X-ray circuit consists of primary and secondary sections. Primary will get normal three phase supply and the secondary will step up the voltage in terms of kV which will inturn builds up the capacitor to charge when the circuit is closed (when exposure button is pushed) . When pre-selected charge is reached, the capacitor completes the circuit & sends the charge to the x-ray tube. The voltage THD was found to be 5.2%, which is more than IEEE 519 standard.


Computed tomography (CT) CT scan uses powerful x-ray technology that circles the body as the patient, lying on a moving, flat table, passes through a very shallow tunnel, commonly referred to as the donut. The fast moving parts of the x-ray source and detectors are within the donut and out of sight. As the Xray assembly rotates around the patient's body, the scanner produces images in thin slices which a computer reconstructs into sharp, three-dimensional (3D) images of the scanned body part. CT is fed from UPS in this hospital. The THD for current under operating condition was 6.01%, voltage THD was found to be within limits.

MRI (Magnetic Resonance Imaging) An MRI (or magnetic resonance imaging) scan is a radiology technique that uses magnetism, radio waves, and a computer to produce images of body structures. The MRI scanner is a tube surrounded by a giant circular magnet. The patient is placed on a movable bed that is inserted into the magnet. The magnet creates a strong magnetic field that aligns the protons of hydrogen atoms, which are then exposed to a beam of radio waves. This spins the various protons of the body, and they produce a faint signal that is detected by the receiver portion of the MRI scanner. The receiver information is processed by a computer, and an image is produced. MRI is fed from UPS in this hospital. A phantom bottle assy and a head coil was used as a simulator instead of patient. The voltage THD was found to be closer to the


limits, but the current THD was 7.9%, and was more than current distortion limit for the system’s ISC/IL ratio. The ratio is 20 for this system.

Cathlab Cardiac Catheterization is a complex medical procedure that is used to diagnose and treat a wide variety of heart conditions. During cardiac catheterization, a narrow tube called a catheter is inserted into the femoral artery near the groin with a plastic introducer sheath. The catheter is guided through the blood vessel to the coronary arteries with the aid of an x-ray. The procedure is performed by a cardiologist in a specially equipped room know as a Catheterization laboratory (cath lab). The most used cathlab equipment consists of an x-ray generator, contrast, and catheters  The CATHLAB was fed from UPS. The voltage THD was found to be 4%, which is exceeding the standards prescribed for hospital premises.

Surgical suits The supply to the surgical suits was highly distorted. Both current and voltage distortion were beyond limits. Another observation was found to be of unbalance in three phases. This results in neutral current to flow back to the transformer.

Other loads These loads consisted of pharmacy, administration blocks, store, lift panel, supply to surgery OPD. This implies that load is of mixed type. Lot of current harmonic distortion was observed along with unbalanced load current. The neutral current was high. At the main panel also, current distortion was found to be 7%.

Observations The analysis of the system highlighted some aspects. They were high THD a unbalanced load currents. These both contribute to high neutral current which will flow back to transformer neutral resulting in excess heating of the neutral cable. As the THD increases, the neutral current also increases