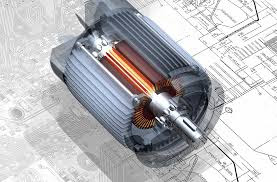 Less common, AC linear motors operate on similar principles as rotating motors but have their stationary and moving parts arranged in a straight line configuration, producing linear motion instead of rotation.


The basic working of a motor is based on the fact that when ‘a current carrying conductor is placed in a magnetic field, it experiences a force’.

If you take a simple DC motor, it has a current-carrying coil supported in between two permanent magnets (opposite pole facing) so that the coil can rotate freely inside. When the coil ends are connected to a DC source then the current will flow through it and it behaves like a bar magnet, as shown in Figure 1.

The role of the commutator: The commutator brushes just reverse the polarity of DC supply connected to the coil. This will cause a change in the direction of the current of the magnetic field and start rotating the coil by another 180° (Figure 1f).

The brushes will move on like this to achieve continuous coil rotation of the motor.
Similarly, the AC motor also functions on the above principle; except here, the commutator contacts remain stationary, because AC current direction continually changes during each half-cycle (every 180°).