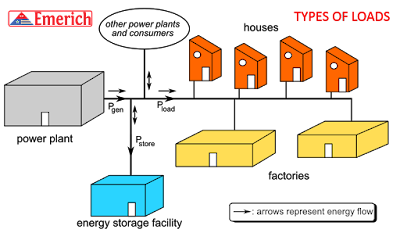 An electrical load is a device or an electrical component that consumes electrical energy and convert it into another form of energy. Electric lamps, air conditioners, motors, resistors etc. are some of the examples of electrical loads. They can be classified according to various different factors.

Resistive loads consume electrical power in such a manner that the current wave remains in phase with the voltage wave. That means, power factor for a resistive load is unity.

Combination Loads
Most of the loads are not purely resistive or purely capacitive or purely inductive. Many practical loads make use of various combinations of resistors, capacitors and inductors. Power factor of such loads is less than unity and either lagging or leading.

Types Of Loads In Power System

It consists of lights, fans, home electric appliances (including TV, AC, refrigerators, heaters etc.), small motors for pumping water etc. Most of the domestic loads are connected for only some hours during a day. For example, lighting load is connected for few hours during night time.

Commercial load consists of electrical loads that are meant to be used commercially, such as in restaurants, shops, malls etc. This type of load occurs for more hours during the day as compared to the domestic load.

Industrial load consists of load demand by various industries. It includes all electrical loads used in industries along with the employed machinery. Industrial loads may be connected during the whole day.

Municipal Load:
This type of load consists of street lighting, water supply and drainage systems etc. Street lighting is practically constant during the night hours. Water may be pumped to overhead storage tanks during the off-peak hours to improve the load factor of the system.

Motors and pumps used in irrigation systems to supply the water for farming come under this category. Generally, irrigation loads are supplied during off-peak or night hours.

Some Other Classifications Of Electrical Loads

According To Load Nature


Electrical loads may also be classified in may different manners, such as according to their functions.