This is a fast charging station for electric cars, capable of delivering 350 kW  to each of several vehicles – over 100x the power of a 13A plug charge at home. 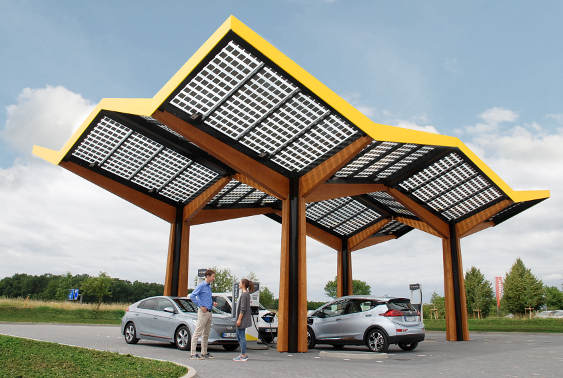 In this case, the station is the first in Germany built by Fastned, which operates 73 stations in the Netherlands and is preparing to expand into the UK and Belgium. By the end of the year, 18 stations are scheduled to be installed in Germany.
“As a result of falling battery prices, more and more affordable electric cars with a larger battery and more range are coming onto the market. This makes it possible to travel more distances by car, but it also increases the need for a fast-charging infrastructure,” said the firm, claiming: “Thanks to these stations, charging becomes more comparable to refuelling.”
Fastned’s goal is to build a network of more than 1,000 fast charging stations in Europe, making long-distance travel possible without long stops.
Charging is initiated by a phone app or with a charge card. Billing is via charge card, debit card or credit card.
All of its charging power comes from renewable solar and wind energy, according to Fastned, including some contribution from solar modules on the roof of the charging station.