Harmonic is multiple order of the fundamental frequency and it can be voltage and current in an electric power system are a result of non-linear electric loads. Harmonic frequencies in the power grid are a frequent cause of power quality problems. Harmonics in power systems result in increased heating in the equipment and conductors, misfiring in variable speed drives, and torque pulsations in motors. Reduction of harmonics is considered desirable. 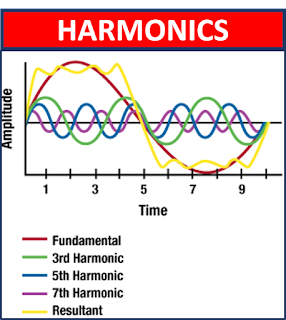 In a normal alternating current power system, the current varies sinusoidally at a specific frequency, usually 50 or 60 hertz. When a linear electrical load is connected to the system, it draws a sinusoidal current at the same frequency as the voltage (though usually not in phase with the voltage)
Current harmonics are caused by non-linear loads. When a non-linear load, such as a rectifier is connected to the system, it draws a current that is not necessarily sinusoidal. The current waveform can become quite complex, depending on the type of load and its interaction with other components of the system. Regardless of how complex the current waveform becomes, as described through Fourier series analysis, it is possible to deconstruct it into a series of simple sinusoid, which start at the power system fundamental frequency and occur at integer multiples of the fundamental frequency.
Further examples of non-linear loads include common office equipment such as computers and printers, Fluorescent lighting, battery chargers and also variable-speed drives.
In power systems, harmonics are defined as positive integer multiples of the fundamental frequency. Thus, the third order harmonic is the third multiple of the fundamental frequency. This type of harmonics is generated in non-linear loads. Examples of nonlinear loads include transistors, electrical motors, and the non-ideal transformer. Non-linear loads create disturbances in the fundamental harmonic, which produce all types of harmonics. However, in this section we focus on the 3rd order harmonic due to its certain special characteristics in the context of powers systems

Power is supplied by a three phase system, where each phase is 120 degrees apart. This is done for two reasons: Firstly it is because generators/motors that use three phases are more efficient due to the constant torque the phases supply, and secondly it is because after power is supplied to a load, the three phases can theoretically be added onto a neutral wire and cancel each other out. This saves the utility from creating return wiring to the power plant. However, if the 3 phases contain 3rd order harmonics, the currents will not fully add to zero. As seen in the figure, the 3rd harmonic will add constructively with the 3rd harmonics within the other phases. This leads to an oscillating current in the neutral wire, which can be dangerous since it is designed (i.e. small-size conductors) to carry minimal current.

FOR ALL TYPES OF POWER QUALITY & ENERGY STORAGE SOLUTIONS
Connect with Emerich Energy
Please write to us info@emerich.in Call: 044-48577667